My thoughts about the current crisis: A letter from Compas Director, Ana Narvaez

Please receive a cordial greeting from our beloved Nicaragua.

I want to give my immense thanks to all of the people that have supported us during the crisis we are living.  I have been working together with Women in Action and this area of the neighborhood for nearly 18 years; and I have seen many needs and difficult times, but nothing like this which we live today.

The problem in Nicaragua is political and for that reason it is a struggle for power, in which the richest will only get richer and the poor even poorer.  So, in this context, does politics really interest us?  Do the Women in Action know why this is happening?  Honestly, no, they really don’t.  And, the saddest thing is that they don’t know because each day they are trying to survive and feed their children, they don’t have time to think about or analyze who will be better to govern them, especially when in the end, they will always remain the same, utilized and forgotten.
​
There is a national dialogue to resolve the problems, but what good is it to us, if it isn’t really a dialogue, but appears to be a pre-school with each side saying, “you are bad”, and “no you are bad”, without resolving anything.  Meanwhile, outside there are people dying, suffering hunger, children that are not going to school, families divided, and roadblocks everywhere. 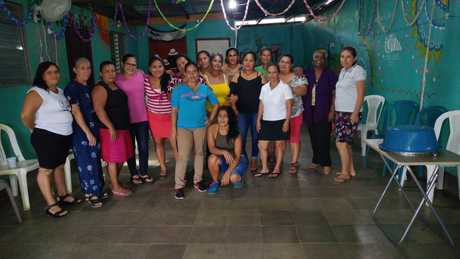 I am outraged to see how our children suffer the consequences of all of this, and to think about how the children from the project are eating just tortilla with salt and others perhaps nothing; meanwhile, those from the national dialogue have a lunch recess with a huge banquet and I can almost bet that they all eat together at the same table.
​
The critical situation has changed our country and has changed many Nicaraguans.  What gives me hope that the situation will improve are the women of Women in Action.  They have had meetings and they know they don’t have the same way of thinking, some are in favor of the government and others are against it, but this has not separated them.  Together, they have formed a strong group of women who work together to improve their community and they are committed to staying united even though they think differently, because the only thing they want is the wellbeing of their children and our community.  Since they are never taken in to account to help resolve the country’s problems, and since they suffer the most during a crisis, they are the best example to follow.

I thank God for giving me the blessing of having these women as an example to follow and as motivation to continue to struggle for my people.